How to Give a Hug 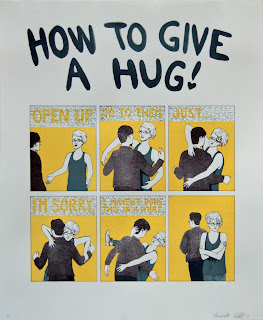 I've been sitting on this one for a while now. This is a lithograph/screenprint that I made just before Valentine's Day. It's been seen by most of the folks I know here in Kansas at this point, having had some time in the hallway of the McKnight building.


I was thinking a lot about the difficulty of intimacy. It's a thing one thinks about, after a good few months of cuddling only a cat. But the idea that there is some fault in me that causes this problem, that it is nothing to do with surroundings and time and availability, is pervasive. Although, as my therapist reminds me weekly, that is not necessarily true even if it feels like it is.

At the top of each panel is some very small stream of consciousness writing. I've been doing more of that, taking fewer steps between the diary entry and the thing I call a piece of artwork. Here's a detail to help see a little bit of that a little better. It's still a struggle, I'm aware. It's hard to read in real life, too. 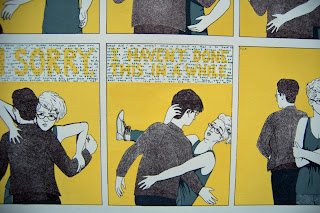 Another thing I've been playing with is how much information I include, and how much I can expect from a viewer. I suppose that's not really different from any piece of artwork; one usually includes more in a piece than a viewer can interpret in a three second glance. But I did that accordion book with the thought bubble and the mezzotint, and that led to this, as well as a video piece that I made which has a run time of 16 hours. (It's currently split into one minute segments which is basically useless, but I'm working on it.)

This print was terrible to pull. I used micron pens to draw on the stone and then did a pure gum etch, which just led to everything filling in and me not being able to see where the ink was. The stream of consciousness stuff was a screenprint, and that was another sort of monster, drying in the screen like nobody's business. I ended up only doing an edition of two, which I felt was appropriate, since only two people experience a hug at one time. I recycled all of the bad prints and made paper out of them, and I'm still not sure what to print on that.

Although it took some time, I've gotten somewhat fond of how this worked out. I think it helps that I'm intentionally silly in it instead of just laughably pathetic, but I do like the drawings and the anti-punchline last panel. The text on top of text is fun too. I'm definitely not done doing that.

Until next time, I'd give you a hug if I could.
Posted by Fishelle at 8:01 PM