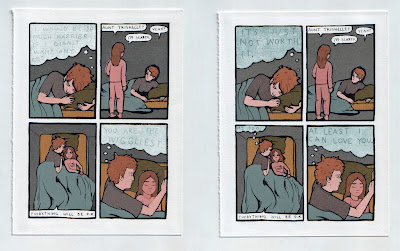 These prints are the beginning of what I hope to be a fairly substantial body of work wherein I have pages that look to be torn out of a book, displaced from their proper context which doesn't actually exist. I'm interested in dealing with how things that happen to people change based on memory, and how people remember things differently even when they experience them together.

These two prints are about my niece, who I was able to see for the first time in a few years at Christmas time. She was delighted to have someone to play Barbies with, and I was so happy to have someone love me wholeheartedly, without judgement or fear. 4-5 year olds are awesome that way. That girl just exudes joy like no one else. At the time, I was recovering from a serious heartbreak, and I was terrified to open up to anyone since it had hurt me so badly before. It was a perfectly timed visit for me.

At the same time, I was absurdly baby hungry for a while. I've always been one to get silly and distracted, making faces and smiling and cooing at children I run into. But for a few months, I was ludicrous. I would have been perfectly okay with either God or Satan using me as a vessel for the Chosen Child. My twitter feed was nothing but sadness and talking about babies I saw. As much as I adore my sister's family, having her four kids running around, screaming, and giving us all the stomach flu helped with this quite a bit.

My niece chose to share a room with me rather than her parents and brothers, and told me beforehand that she would ask me to help her feel better if she got scared. She's scared of the dark, so she came to cuddle with me and calm down a few times. It was adorable and really great for my emotional state. But she is indeed the wiggliest.


Technically, this print stretched me a bit. To start with, I used french chalk to get rid of any plate tone on the etching plate. That added to the time it spent to wipe the plate, and also made it difficult to get my aquatint consistent. It worked well, but definitely took some getting used to. I also decided to use the same copper plate for both versions of the etching, to scrape and burnish out the text and then to re-etch it. This was dumb. I thought it made sense conceptually, having both these prints come from the same place seemed to reinforce what I was doing. But it took ages, and the acid strength changed substantially, making the second round really dark comparatively. I had to register each layer of screen individually, which was difficult and did not work out as well as I would have hoped the first time around. Since I'd already scraped my plate clean, I couldn't really reprint it, and just had to pick out the least bad for the "Babies" print. I learned enough to make things work better the second time around. Unfortunately, my ink dried a bit while in the tubs between screen sessions, so I had more issues with it drying in the screen. From that I learned to always add some water to older ink to make it work properly again.

All in all, I'm pretty pleased with this one. You can see it in person at my BFA show, along with some other work. This weekend is the last time you can see the show if you missed the opening. It will be open friday and saturday, at the Felt Building. (341 S Main, SLC UT)