Since the start of the semester, I've learned a few new processes of printmaking. It's been great! This here is my very first lithograph. 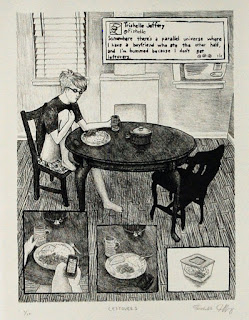 And right here? This is my first mezzotint! 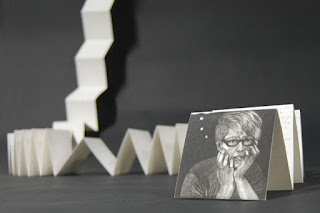 I'm taking/TAing a lithography class right now. I've finished two lithos now, but I'm only sharing the first one with you, because the second is terrible. Just awful. This one though, I'm pretty content with. 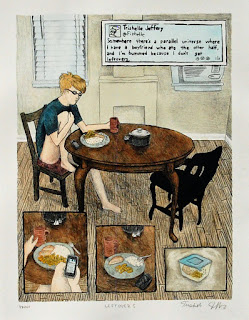 I've sold this hand colored proof already, so that helps me feel pretty happy about it. Lithography is a magical thing. I'm hoping I'll have a semi-decent handle on it by the time the semester ends, but it is very different. For those that don't know, lithography is done through chemical reactions in a stone or plate that cause it to accept or reject ink in certain areas. And voodoo. I've said printmaking is magic before, but man, I didn't even know.

This piece is about how I kept making two servings of meals for my first little while living alone. The first time it was soft shell white person tacos. I made two large tacos, assembled and all, then just forced myself to eat both of them while crying. The next meal I made something that I could put in  the fridge for later, because I learned. 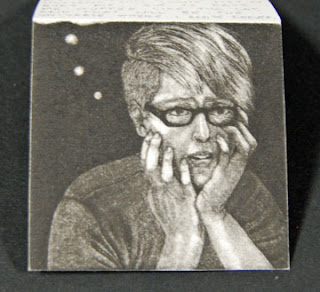 This mezzotint is a lil thing, three inches square. However, it's got roughly 15 feet of paper for that thought bubble attached.

In this thought bubble, I wrote a bunch of stuff that I was worried or anxious about. These fears include, but are not limited to: the possibility that every time I imagine something nice my consciousness experiences it in a parallel universe so that nice thing can never happen in reality, seeing my current crush get married and becoming friends with his wife who decides to stuff him like people do with pets and take him all over the place so I can't even escape seeing him with someone else when he's dead, and bed bugs.

I could be boring and explain what a mezzotint is, but I'll let you google that if you don't know and get back to homework.

But one last thing before I go, for those in Wichita! On Wednesday the 18th, I'm doing a short lecture on my work along with a few other grad students. The lectures in general begin at 7:15, I'm scheduled to start at 8:05. It will be in the McKnight building on Wichita State University campus in room 210. It's free and open to the public. I'm incredibly nervous already, so see if you can come and make this terror worth it!