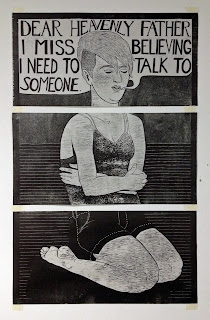 I have a new print to talk to you about! Obviously. It's that one, right there, pictured above.

This print was made for an event and exhibition in the Ulrich Museum of Art that will be happening on September 16th from 4-7 PM. Here's a link to the Facebook event with some more information.

The event is a steamroller printing event. There are other places involved apart from Wichita State University and the Tornado Alley Press guild (which are the things I am a part of), and I believe it will mostly be their blocks that will be printed with the steamroller.

The exhibition in the Ulrich is an Exquisite Corpse themed show. Everyone involved carved three blocks, (a head, torso, and legs) and museum visitors will be able to interact with the work and move the prints around, creating new figures with various parts. It's going to be great! Please come to these things if you can!

I didn't want to spend all that time carving something that I didn't feel anything substantial for. And as I drew my figure to fit on these blocks of plywood, the kneeling form had a very specific resonance for me. So the print is based on my struggles with leaving the Mormon church. I'm not going to talk at length about that here, partially because the print hopefully says anything I wanted it to on its own. But it has certainly been something, to finally have that decision unhampered by familial obligations or desire to keep from hurting those around me, to make a choice for myself and then to have to deal with the consequences on a personal level.

On the print itself, it was just a matter of taking the hours and carving. It's a fairly straightforward process and I've done it enough to know what will show up. I left a lot more noise in the skin than I often have before, and I like that fairly well. One of the things that took me the most time is that dark but not black area just below the speech bubble, down to where the lines in the background begin. For that, I took an awl (a bookmaking tool with a large needle that has a handle attached) and just jabbed at the board to make hundreds and hundreds of tiny holes. This was a terrible idea. Don't do this. Unless it's for a much smaller area. I spent at least 6, maybe closer to 8, hours banging holes into my board because I'd already committed to it at that point.

That's all for this particular work, but I've been running and working nonstop nearly all month since I moved to Kansas, so I will have more to show soon. I pulled my first lithograph yesterday. It needs some edits before I blog on it, but I'm excited to share more with you all soon.
Posted by Fishelle at 5:03 PM