If everyone could just pretend I posted this an hour earlier and it was still September and I hadn't missed any months in my plan to blog at least every month this year, that'd be great.

Anyway, things are good. I guess. I've actually been having a really hard time being the new kid in a big city along with other more personal problems that I'll probably just share along with artwork about them, but it's getting better. At least, today was better. I drew a little comic, and that helped a lot. I've basically been working on this one project that was due on Tuesday for the last 11 hours. Finally getting something done with that was also good. Though I did have a bit of a breakdown and started sobbing at the train station around 4 this afternoon, things have improved some.

I've done some art, but haven't taken many pictures of said art. This photopolymer that I've been working on all day is what I thought I might post here for the month, but it's not done. Obviously. Thus the procrastination of blogging.

So the only piece I have a picture of is this one print that I started the semester off with and don't like much. 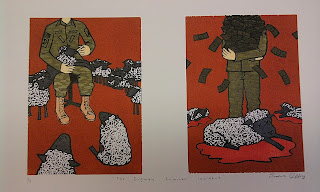 So this crappy crooked cell phone picture is of a print that I did about what I felt like I was doing for the summer by working for the government. I'm pretty far to the left politically, and it makes me sad that my country has a huge organization devoted to killing people. However, I know this is not how everyone feels, and I do not think any less of anyone who disagrees with me. Although that's what I believe, it's not something I generally find necessary to argue about. I don't think politics are worth offending people over, so I don't make art abut them usually, and I even try to avoid talking about them nowadays. This is why I don't like this piece. I feel like I can do better. I feel like I have more important things to say.

Technically speaking, though, I am proud of it. That's more colors than I've ever done in a single print before. It's pretty dang clean, and the registration's pretty decent for how quick I pulled it out. My favorite thing about it though is the colors. I sort of made them up as I went along, and doing the proof with these colors, everything seemed to be getting worse and worse. They looked awful together. They were all just garish and wrong, and I was sure that I would have to re mix all my ink, which really sucked. Then I pulled the keyblock. And with that black outline, magically, everything worked.

Printmaking is magic.
Posted by Fishelle at 11:41 PM 2 comments: